Downgrade iOS 10 back to iOS 9.3.3 if you think the new firmware is buggy or your device can’t handle it…

What a incredible firmware Apple released this month to the public testers. I have not seen that Apple is opening the door of jailbreak apps in iOS platform and there are a bunch of tweaks added to the core design of iOS 10.

But any decision made in hurry can force you to go back. The same situation rising with iOS 10 users too. Most of the users who had upgraded their jailbroken firmware to iOS 10 to get bunch of customization have to downgrade iOS 10 to iOS 9.3.3 in hope that PanGu would release iOS 9.3.3 jailbreak.

User responses are great for iOS 10 however as iOS 10 still very unstable because of new features and beta stage, it needs time to grow up for final version. Meanwhile, PanGu also trying hard to get some attention with their iOS 10 jailbreak.

PanGu introduced Jailbreak iOS 10 which was really a great hope for all Cydia users who were waiting for the tweaks and apps. But at the same time, they indicated to release iOS 9.3.3 jailbreak first and this could be another great reason for users to downgrade iOS 10 to iOS 9.3.3.

To verify all these condition, we also had installed iOS 10 and found that there are really some awesome features available but we had tried iOS 10 on iPhone 5 which is not able to handle redesigned control center and notification center and the result is, it gets hanged multiple times while accessing control center and notification center. Another bug, I found is on iOS 10 lockscreen where widgets are not clearly appearing all the time.

In a research, it’s clear that large number of users who have upgraded their firmware to iOS 10 want to downgrade iOS 10 and restore iOS 9.3.3 for some reasons. We can predict that all above reasons may force them to downgrade iOS 10 to iOS 9.3.3. I would say iOS 9.3.2 is also the better choice if you’re waiting for PanGu iOS 9.3.2 jailbreak.

We’ve tried to mention each and every steps clearly with screenshots. You won’t feel hard to downgrade iOS 10 at any case, but before that you should know couple of things…

1. You need IPSW file which can make your downgrade process easy. To downgrade iOS 10, first download iOS 9.3.3 IPSW. Here you can choose iOS 9.3.2 IPSW files too if you want to downgrade to iOS 9.3.2. However, we’d recommend users to depend on iTunes to choose best firmware to restore. In that case, there isn’t any need of IPSW.

3. Once you put your device into DUI mode after connecting your device to your computer, iTunes would show above screen which would mention that you’re in Recovery mode.

4. Here, Hold down Alt or Option key on Mac OS X and you’d get below screen message where you need to tap on Check for Update or choose IPSW files which you’ve downloaded in the first step.

5. The next screen would ask you for final confirmation about downgrade iOS 10 to iOS 9.3.3 or downgrade to iOS 9.3.2. Here you must tap on “Restore and Update” button. 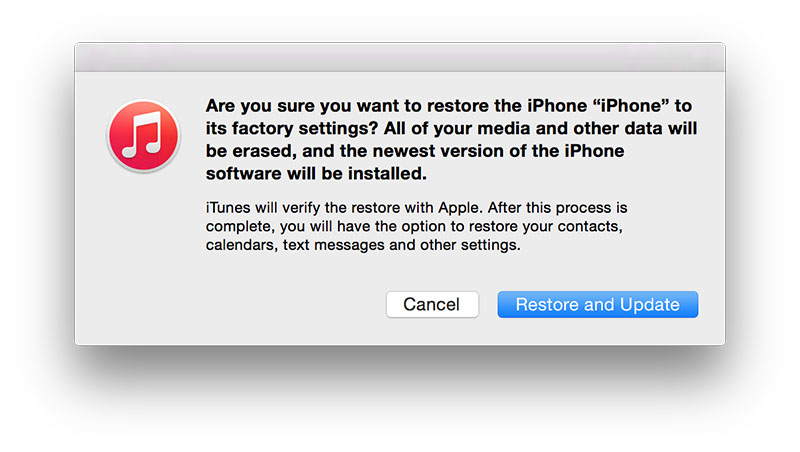 Download iNoCydia: How to Install Cydia Without Jailbreak iOS 10